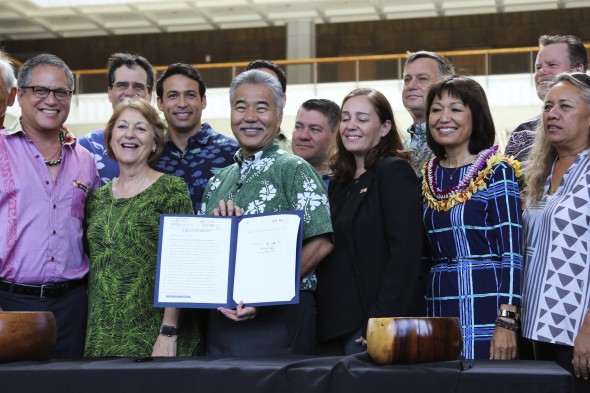 Most Aussies know to ‘slip, slop, slap’ thanks to the catchy sun safe campaign that began in the 1980s but have you ever considered what exactly is in the sunscreen you’re slopping on? It might be time to take a closer look at the bottle of sunscreen next to your beach towel. Hawaii has just become the first US state to ban certain sunscreens in order to protect their coral reefs. As reported by AccuWeather, Senate Bill 2571 prohibits the sale and distribution of non-prescribed sunscreens on the islands that contain oxybenzone or octinoxate, which can be deadly for coral larvae. Hawaii Governor David Ige signed the bill last week and stated “We are blessed in Hawaii to be home of some of the most beautiful natural resources on the planet, but our natural environment is fragile, and our own interaction with the Earth can have everlasting impacts,”

Popular brands including Hawaiian Tropic, Coppertone, and Banana Boat currently use the banned ingredients but will have some time to transition to safer alternatives such as zinc oxide or titanium dioxide. The bill doesn’t actually take effect until 2021 and it will be interesting to see whether any Australian states follow this lead. It’s a very progressive move by Hawaii and definitely something to consider next you’re selecting a sunscreen in the supermarket or pharmacy.